The Rape of Nanking by Iris Chang 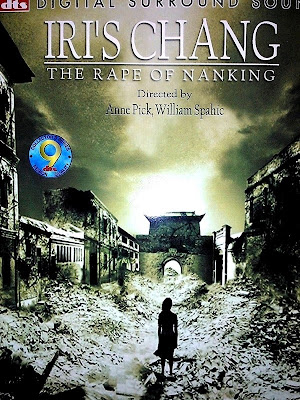 This movie is about the massacre in Nanking, China by the invading Japanese forces in 1937.  It is also a tribute to Iris Chang who wrote the book "The Rape of Nanking" published in English in 1997. The movie is based on her book.  Iris committed suicide in November 2004 because of depression which was possibly linked to the many horror stories which she had uncovered during her many interviews with the survivors and from the diaries of the deceased.

I watched this movie to find out why grandpa, Leong Sin Nam, was so engrossed in raising funds for the mainland Chinese.  The letters addressed to him from China must have described the utter hopelessness of the Chinese people then.  The Japanese had already conquered Manchuria and Shanghai before Nanking.  Nanking was the capital city of the Nationalist Government of Chiang Kai Shek.

You may wish to read more about Iris Chang in Wikipedia.  I admire her courage in bringing out the true story about Nanking which many still have relative amnesia, especially the Japanese.
Posted by Dr. Oon Keong Leong at 7:55 AM

Email ThisBlogThis!Share to TwitterShare to FacebookShare to Pinterest
Labels: Events