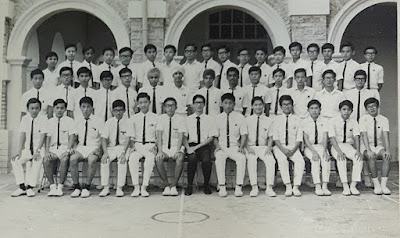 Mr Chin Yoong Kim was a geography and music teacher in ACS Ipoh.  He was very passionate about teaching and taught geography with great enthusiasm.  He would bring along those large foldable maps to class to illustrate the teaching points and to make his lessons interesting. His classes were usually very informal where questions would come from both sides, the teacher and his students.
His huge interest in geography and how local conditions affected peoples' livelihoods brought him to visit Leong Sin Nam Farm.  He was interested to investigate how pomelos grew and how pigs were reared.  During the visit several of us had great difficulty getting on the plastic covers over our shoes to prevent farm contamination.  Fortunately, none of us slipped and fell into a pig stye!
I had the privilege of being his Form 4 Science A Class Monitor in 1972 with Wai Hoong as assistant.  During a class photo shoot, I remembered him asking me why I was still in shorts rather than in longs.  He wasn't angry as it was only a small matter and we laughed it off.  But certainly the photo turned up okay as above without any details of hairy legs.  Surely, all of us look younger and sportier in shorts!
As you can see in this photo above, we had in class some of the most mischievous people around in school.  We were usually the noisy lot and Mr Yoong Kim would have this funny way of addressing us as "yooooou creatures"! 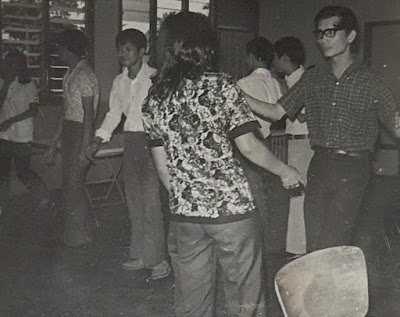 Mr Yoong Kim was such a friendly and approachable teacher.  We always invited him to our class social functions.  He would dance, laugh and joke with all of us. He was also such a gentleman whom all other teachers can easily associate and relate. These pictures were taken in 1975.
Mr Yoong Kim would invite all of us to his bungalow at Jalan Khong Kam Tak every Chinese New Year. We felt very much at home in his home and whatever goodies he had in his refrigerator were ours too. 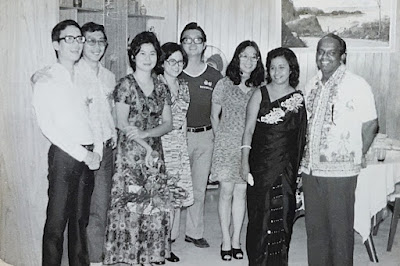 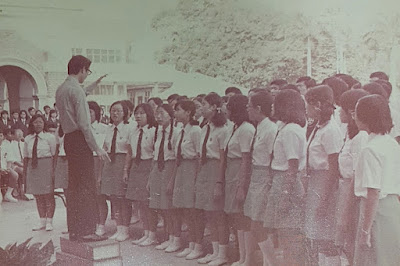 Mr Yoong Kim had great passion for music and school stage plays.  His favorite warm up songs were "Tiny Bubbles" and "Pearly Shells".  I was not in the school choir nor in his musical productions, but did acquire some singing tips from him during school assemblies.
Here are some of his singing tips.  Use abdominal breathing to get more air into the lungs.  Relax the throat and tongue muscles and the voice must come out from at the vocal cord level.  Let the musical notes vibrate in the oral cavity to create a natural unique sound.
After leaving ACS, I met Mr Yoong Kim on several occasions.  We had some sharing during his Rotary Club meetings at the Royal Ipoh Club, when I was a guest speaker on several occasions.  Mr Yoong Kim was once the President of the Rotary Club of Ipoh.
Below are two pictures of Mr Yoong Kim during the ACS Alumni Dinner in 1999.  He was very involved in the ACS Ipoh Alumni Association and the Perak Society of Performing Arts. He was also once in-charge of the Canning Garden Methodist Church choir. 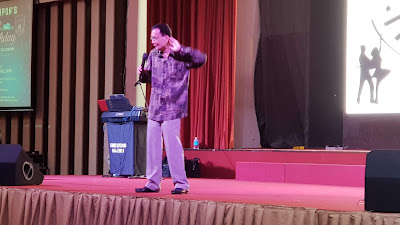 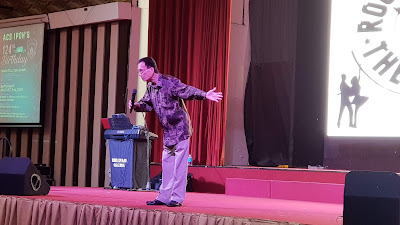 One can never forget his style of getting all the attendees jazzed up before the singing of the ACS School Song in every ACS Alumni Dinner.
Mr Yoong Kim had been a great teacher to many students. I must surely salute his humble demeanor and his willingness to help others.
Mr Chin passed away on Wednesday 16th November 2022. May the good Lord continue to bless him and keep him.  Rest in peace dear Sir.
Posted by drokleong at 1:37 PM 2 comments:
Email ThisBlogThis!Share to TwitterShare to FacebookShare to Pinterest

This Ipoh Art & Music Charity Festival was held at Shen Jai High School on 29th October.  The main sponsor was Kiwanis Gopeng and the main organisers were Joyous Music Centre and Eratechnology.  The Guest of Honour was Dr Lee Boon Chye. The Organising Chairlady was Ms Veronica Leong.

Here are some of the artwork.  I am very impressed with their digital paintings printed on canvas.

Mr Ken Leong with his saxophone.

I am most thrilled by this Drum Battle.
Posted by drokleong at 8:26 PM No comments:
Email ThisBlogThis!Share to TwitterShare to FacebookShare to Pinterest
Labels: Events

Getting to know each other in person.  A privilege post pandemic.

When the food is great and sponsored too.

Masks off for quick bites.

Speakers from KL, Penang and Johor. 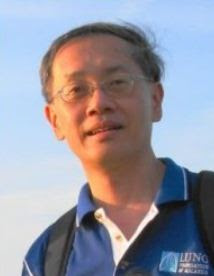