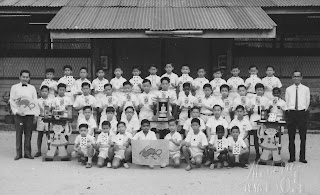 The ACS Primary School Magic Club lead by Mr. Samuel Seow (left) the magician.  This picture was taken in 1966.  Mr. Low Chooi Beng (right) was the principal then.  Mr. Samuel continued to teach magic to the students for many years and even opened a magic shop in Anderson Road. I bought a magic wand, several decks of cards, match boxes, ropes etc and practised magic but failed to qualify as a magician.  Mr. Paul and Mr. Peter, sons of Mr. Samuel Seow, learned the trade but left later to serve the Lord Jesus Christ till today.  Mr. Samuel Seow is now a devoted Christian and is a member of the Canning Garden Methodist Church where I usually meet him to "yum cha". 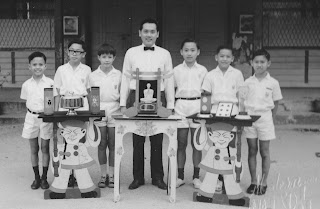 From left: Tan Chik Kaw, Leong Oon Keong, ?, Mr. Samuel Seow, ? ? ?.  Mr. Samuel Seow was also instrumental in setting up the school Movie Club.  I still remember the picture "The Return of the Mummies".  A real scarry movie for me then. Mr. Samuel was my class teacher once and I still remember his English dictation classes.  He had a big bat to frighten you if you get lots of mistakes in English spelling.  Now my Inglish spelling is pretty good.  Keep it up Mr. Samuel.
Posted by Dr. Oon Keong Leong at 4:22 PM 5 comments:

Email ThisBlogThis!Share to TwitterShare to FacebookShare to Pinterest
Labels: ACS 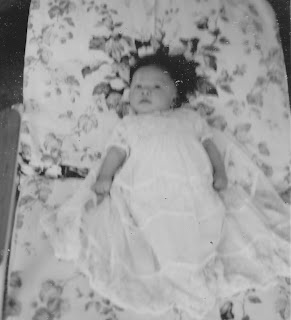 The first year of my life in Ipoh. I don't recall very much about this period except to say that the bed which is pictured here stood the test of time.  This spring bed has rubber mattresses and 2 rubber wheels at the head end.  The frame is made of iron and it is completely mobile.
Posted by Dr. Oon Keong Leong at 9:14 AM No comments: