ACS USC is straight forward, Anglo Chinese School Upper Science C but what is TAG? Well...... it is not tau sau pow or those sort of stuffs. It is something I just coined....TAG = Teluk Anson Gang even though it should be called TIG cos Teluk Anson is now Teluk Intan but TA sounds more nostalgic, exciting & far away la.

After so-so many years we met for lunch today and for those who do not know all the 4 of us (including me) had our origins in Teluk Anson (now Teluk Intan) also better known as the town with the Leaning Tower of Perak. I was born in TA and only came to Ipoh after standard 3.

Lunch was simple but the company & fellowship was great and plus all the catchups....some very funny and others simply delicious. Also discovered or rather we decided that we were all sort of related somewhere plus another one in Oz. Hemhemmmm what a discovery but better late than never! Its sort of a bit long and complicated maybe I will update that in another blog .... 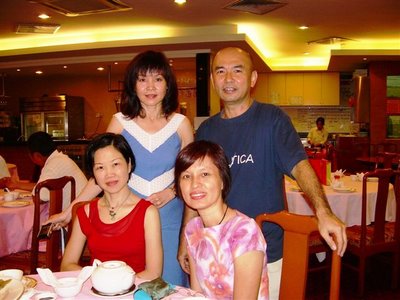