This is one of the pictures to be added to the LYN Memorial Library.  It was taken on 22nd June 1968 and shows the opening of the Leong Sin Nam Memorial Dining Hall in SMJK Anglo Chinese, Ipoh.  On the left was the late Mr. Teerath Ram and on the right the late Tan Sri Khir Johari who was then the Minister of Education.  My father Mr. Leong Yeow Nyean and his brother Mr. Leong Khuen Nyean both had their early education in the Anglo Chinese School. 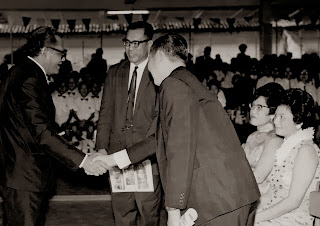