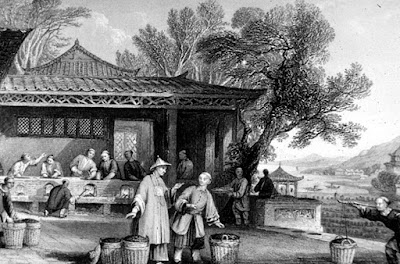 According to legend, Emperor Shen Nung was sitting under a tree (Camellia Sinensis), while his servant boiled some drinking water. Dried leaves from the tree fell into the pot and infused with the water, creating the first tea infusion which the emperor enjoyed.

Containers of tea found in tombs dating from the Han Dynasty.

Tea became a popular drink in Buddhist monasteries, because caffeine kept the monks awake during long hours of meditation.

Lu Yu wrote the first book entirely about tea, the Cha Jing or The Classic of Tea. Lu Yu was an orphan raised and educated in a monastery. This inspired him to write the book on tea.

Japanese monks who visited China to study took this tea plant back with them to Japan, resulting in the beginnings of the Japanese tea culture.

Whipped powdered tea became fashionable during the Song Dynasty, but disappeared after the Yuan Dynasty.


Later half of the 16th Century    There is brief mention of tea as a drink among Europeans, mostly from Portuguese who were living in the East as traders and missionaries.

The first to ship tea back to Europe commercially were the Dutch and not the Portuguese. The first consignment of tea was shipped from China to Holland via Java.

Tea soon became a fashionable drink among the Dutch and from there spread to other countries in Western Europe. Due to its high price, it remained a drink for the wealthy.

First references to tea in Britain; an advert in a London newspaper announced its availability in a coffee house, referred to as the “China drink” known as Tcha, Tay or Tee.

The East India Company began to import tea into Britain with a first order of 100 lbs of China Tea, shipped from Java.

In Britain, the marriage of Charles II to Catherine of Braganza, a Portuguese princess who was a tea addict, was a turning point in the history of tea in Britain. Her love for tea established it as a fashionable beverage, first at court and then among the wealthy.

High taxes on tea and its popularity brought about the smuggling and adulteration of tea in Britain as the masses could not afford.

Tea was adulterated with leaves from other plants or leaves which had already been brewed and then dried. Sometimes the adulterated tea colour was not real enough so anything from sheep dung to poisonous copper carbonate were added to make it look more like the original tea. Smuggled and adulterated tea weighed 7 million pounds while legally imported tea was only 5 million pounds.

The Boston Tea Party: a protest against tea duties, that sparked off the American War of Independence, which eventually led to the USA becoming an independent nation instead of a group of British colonies.

The British government slashed taxes, making tea more affordable and this put an end to the smuggling.

The end of the East India Company’s monopoly on tea trade with China brought about by the growth of tea plantations in the British colonies like India and Sri Lanka. Shipping time to Britain was reduced significantly and tea became more affordable.

Thomas Sullivan, a New York tea merchant started to send samples of tea to his customers in small silken bags. Some customers assumed that these tea bags were to be used in the same way as metal infusers and put the whole bag into the hot water pot. Thence, the unintentional creation of the tea bag. Based on customer feedback, Sullivan developed the first tea bags out of gauze.

Tea bags were developed for commercial production, initially from gauze and then later from paper.

The first tea plantation was established in Malaya during the British administration, in Cameron Highlands.

Tea is the most widely consumed beverage in the world next to water. China, India and Kenya are the top 3 tea producing countries.