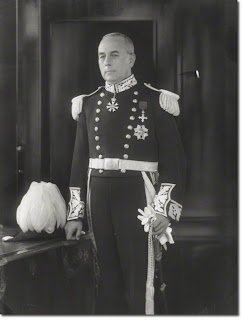 Sir Thomas Shenton Whitelegge Thomas GCMG GCStJ (10 October 1879 – 15 January 1962), commonly known as Sir Shenton Thomas, was the last Governor of the Straits Settlements. He served from 1934 to 1942, during which time the Second World War broke out, and again from September 1945 to April 1946, when the Straits Settlements was dissolved.

Before he went to Malaya as the colonial administrator, Thomas was the Governor of Nyasaland from 1929 to 1932. He was made a Knight Grand Cross of the Most Distinguished Order of Saint Michael and Saint George (GCMG) in 1930.

Thomas was a prisoner-of-war during the Japanese occupation of Singapore (15 February 1942 - 15 August 1945) having decided to stay in Singapore during the war. He was imprisoned in Cell 24 of Changi Prison along with Ernest Tipson. Thomas helped established the King George V National Park in Malaya (later renamed the Taman Negara). Shenton Way, located in Singapore's business district, is named after him. After the war, Thomas remained as the 11th British High Commissioner in Malaya (9 November 1934 - 1 April 1946), until the Malayan Union was established and succeeded the British administration in the Straits Settlements (except for Singapore, which was created a separate colony), Federated Malay States and Unfederated Malay States, where the post of Governor-General of the Malayan Union was created.