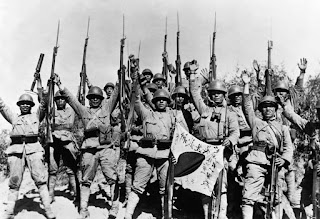 The Second Sino-Japanese War was a major war between China and Japan during World War II. It started originally in 1931 with major disputes between them. Eventually after the Marco Polo Bridge incident, the two countries officially declared war.

Japan was aiming to dominate China for their limitless amount of raw materials and resources, for they would ensure the prosperity of their islands. Also, Japan wanted to create puppet countries, which are countries that are supposedly independent but in reality are manipulated by another country. These puppet states would suit Japanese interests.

China at the time was divided between the Republic of China, led by the Chinese Nationalist Party, and the Chinese Communists. The Nationalist Party had many goals. They wanted to defend their country, to decimate foreign imperialism (the extension of a nation’s territories or boundaries), to unify the country, and also conquer communism. China’s internal wars were probably one of the main reasons why China was taken over by Japan. The Republic of China was a very weak government at the time. On the other hand Japan surfaced as a very powerful country through their measures of modernization since the First Sino-Japanese War.

Since Japan was affectively invading China, China pleaded to the League of Nations, now known as United Nations. After the league declared that Japan was wrong for invading China and the countries around it, Japan withdrew from the league and stubbornly continued their advances. Even though Japan was trying to form puppet states/governments, the carnage of the imperial army was one the Chinese people looked upon with disapproval and prevented the governments they set up from being popular. The Nanking Massacre was one of the major reasons why. Nanking, today’s Nanjing, was the capital of China back then. The Imperial Japanese Army totally destroyed it, during the massacre atrocities took place such as rape, arson, execution of civilians, etc. Over 400 000 people were slaughtered.

At the time, it appeared that the Chinese Nationalists would lose, for most of their military arms were under Japanese control. However, Germany and the Soviet Union did provide support to China. Germany helped modernize China’s industries and military in return for raw materials, which China had a vast supply of. Eventually, the Germans broke off their trade due to their progress to World War II. The Soviet Union wanted to help China stay in the war to obstruct Japan from invading Siberia. Therefore, they provided China with military forces. Other countries, such as U.S.A., provided China with oil and steel embargos. However, Japan didn’t have those resources and had to get their hands on natural resources, for the attack on China couldn’t continue without them. This led them to the raid on Pearl Harbour. This proved to be a deadly mistake, as U.S.A. declared war on Japan.