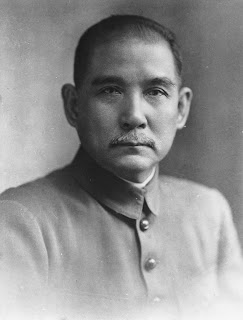 Sun Yat-sen (/ˈsʌn ˈjætˈsɛn/; 12 November 1866 – 12 March 1925) was a Chinese politician, physician and philosopher who provisionally served as the first president of the Republic of China; and the first leader of the Kuomintang(Nationalist Party of China). He is referred as the "Father of the Nation" in the Republic of China due to his instrumental role in the overthrow of the Qing dynasty during the Xinhai Revolution. Sun remains a unique figure among 20th-century Chinese leaders for being widely revered in both mainland China and Taiwan.

Although Sun is considered to be one of the greatest leaders of modern China, his political life was one of constant struggle and frequent exile. After the success of the revolution in which the Han Chinese regained power after 268 years of living under Manchurian rule (Qing dynasty), he quickly resigned from his post as President of the newly founded Republic of China and relinquished it to Yuan Shikai, and led a successive revolutionary government as a challenge to the warlordswho controlled much of the nation. Sun did not live to see his party consolidate its power over the country during the Northern Expedition. His party, which formed a fragile alliance with the Chinese Communist Party, split into two factionsafter his death.

Sun's chief legacy resides in his development of the political philosophy known as the Three Principles of the People: nationalism (independence from foreign imperialist domination), "rights of the people" (sometimes translated as "democracy"), and the people's livelihood (just society).