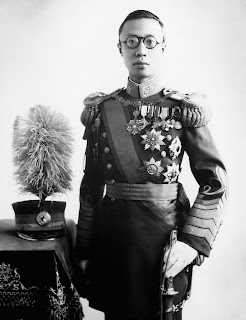 Puyi or Pu Yi (/ˈpuː ˈjiː/); simplified Chinese: 溥仪; traditional Chinese: 溥儀; pinyin: Pǔyí; 7 February 1906 – 17 October 1967), of the Manchu Aisin Gioro clan, was the 12th and last Emperor of the Qing dynasty. When he was a child, he reigned as the Xuantong Emperor (pronounced [ɕwántʰʊ̀ŋ]; Chinese: 宣統帝; Manchu: ᡤᡝᡥᡠᠩᡤᡝ
ᠶᠣᠰᠣ
ᡥᡡᠸᠠᠩᡩᡳ; Möllendorff: gehungge yoso hūwangdi) in China and Khevt Yos Khaan in Mongolia from 1908 until his forced abdication on 12 February 1912, after the Xinhai Revolution. He was briefly restored to the throne as emperor by the warlord Zhang Xun from 1 July to 12 July 1917.

In 1932, after the Japanese invasion of Manchuria, the puppet state of Manchukuo was established by Japan, and he was chosen to become "Emperor" of the new state using the era-name of Datong (Ta-tung). In 1934, he was declared the Kangde Emperor (or Kang-te Emperor) of Manchukuo and ruled until the end of the Second Sino-Japanese War in 1945. After the People's Republic of China was established in 1949, Puyi was imprisoned as a war criminal for 10 years, wrote his memoirs and became a titular member of the Chinese People's Political Consultative Conference and the National People's Congress.

Adapted from Wikipedia.
Posted by Dr. Oon Keong Leong at 2:30 AM