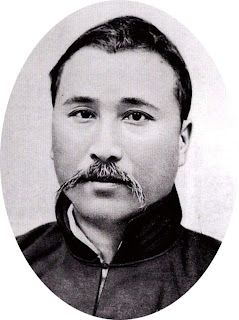 Chen Jiongming was born in 1878 at Haifeng, Guangdong, China.

Chen was instrumental in backing Sun Yat-sen's Constitutional Protection Movement. He also restored Sun to power after the Guangdong-Guangxi War. Chen disagreed with Sun about the direction that reform should take—Sun wanted to unite the country by force and institute change through a centralized government based on a one-party system, while Chen advocated multiparty federalism with Guangdong becoming the model province and the peaceful unification of China. Sun became suspicious that the federalist movement was being exploited by the warlords to justify their military fiefdoms.

Relations deteriorated further when Sun became "extraordinary president", a move not condoned by the Provisional Constitution. It was Chen who first invited the Chinese Communist Party to Guangdong against Sun's objection that the Communists might dilute the movement. After the First Zhili-Fengtian War in 1922 there was a strong movement to reunite the northern and southern governments by having both Sun and Xu Shichang resign their rival presidencies in favor of restoring Li Yuanhong as president of a united republic. Chen was enthusiastic but Sun felt the new government would be a powerless puppet of the Zhili clique.

Sun Yat-sen and Chen Jiongming soon split over the continuation of the Northern Expedition. Sun conceived it to have begun with the occupation of Guangxi. From there he wished Chen to push into Hunan. After Wu Peifu of the Zhili clique in Beijing recognized his power in the south, Chen abandoned Sun. Unexpectedly revolting against the Kuomintang militarily in 1922, Chen led his forces to attack Sun's residence as well as office. Sun was forced to escape on HMS Moorhen and delay his Northern Expedition.

With the help of Tang Jiyao, the KMT retook Guangzhou in 1923. Chen fled to Huizhou in eastern Guangdong after Sun's army defeated him. From 1923-25 the Guangdong government organized two eastern campaigns against him and he fled to Hong Kong, as his remaining forces were completely wiped out in 1925. He became an ally of Tang Jiyao, after Tang was expelled from the KMT following the Yunnan-Guangxi War. He was elected premier of the China Public Interest Party with Tang as his deputy. From Hong Kong he criticized the Nationalists' single-party system and continued to advocate multiparty federalism. After the Japanese invasion of Manchuria, he attacked Chiang Kai-shek's regime for its refusal to confront Japan and he organized boycotts of Japanese products. He died of typhus on September 22, 1933.